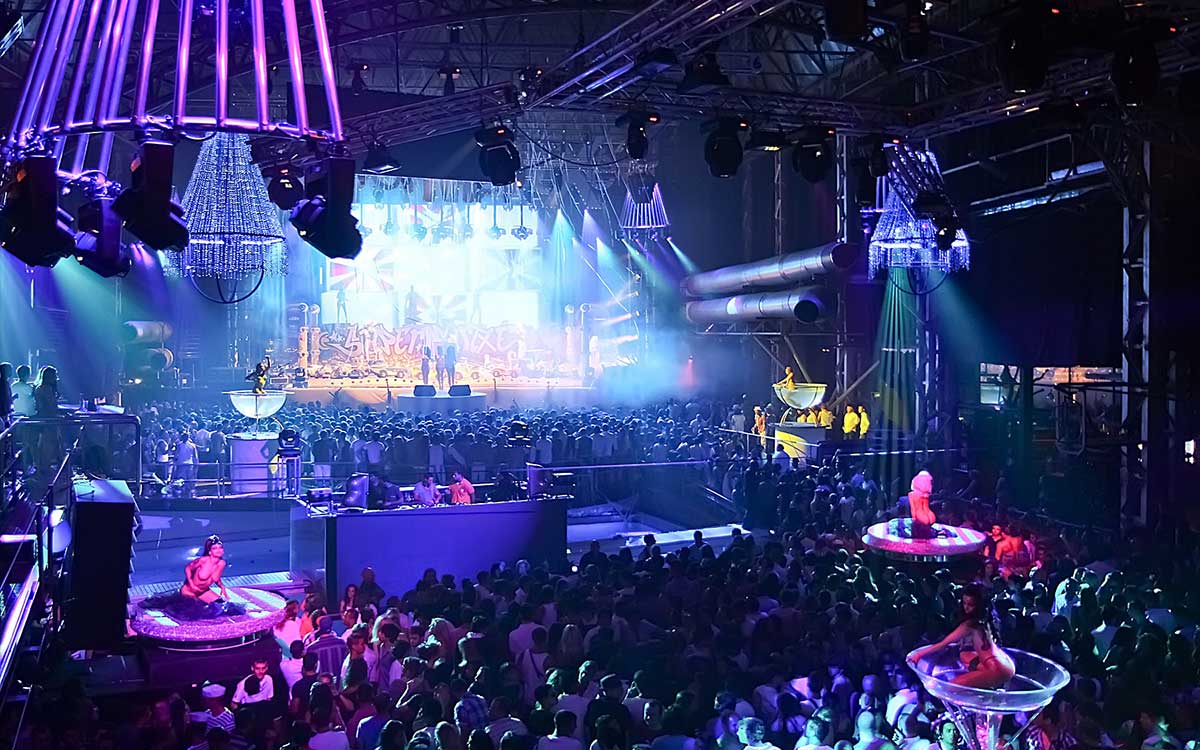 
Though Pacha is now a global brand with clubs all over, its heart belongs to the White Isle. Famed for its chic interior and hosting some of the world’s biggest DJs and club nights, its logo, a pair of cherries, is arguably dance music’s most recognisable.
Its club nights, ranging from the glamour and glitz of David Guetta’s long-running F**k Me I’m Famous to the more underground disco tech cool of Solomun’s +1 party, range across the dance spectrum. But what’s kept Pacha such a vital force on the Ibiza scene and thus the global stage is its ability to regenerate. Last year, EDM cake thrower Steve Aoki joined the firmament of stars twinkling in Pacha’s canopy, his Aoki’s Playhouse catering to the brash American stadium dance sound and its popularity in Europe. On the flipside, this season, INSANE will be one of its flagship nights, welcoming MK and John Digweed as residents, embracing deeper flavours and classic house vibes at once.

Last season disco hero and architect of electronic dance Giorgio Moroder performed there, while A-list celebs like Orlando Bloom, Justin Bieber and Lindsey Lohan flocked to its opulent VIP terrace. There’s also the matter of the club’s swish restaurant, which offers Mediterranean/Japanese fusion cuisine, or their very smart El Hotel, which brings luxury tilted towards DJs and dance fans. For the real high rollers, Destino is a five-star Pacha resort which also hosts top class dance events, with Pacha resident Solomun and pals dropping in to play from time to time.

On the more low-key tip, back in the main club hub, Tuesday events like Flower Power (hosted by resident DJ Piti Urgell, who started the night back in 1973!) offer an alternative clubbing experience, with more of a hippy-fied disco/funk/rock flavour to the soundtrack and a fun, frivolous atmosphere. Pacha is also unusual in that its doors remain open all year round unlike the fair-weather competitors, meaning its connection to Ibiza residents remains far stronger. Then there’s their dedicated party boat Pacha 67, club/restaurant/cabaret venue Lío, their own Pacha Magazine, clothing brand, record label… we could go on. It’s safe to say Pacha’s got it sewn up.