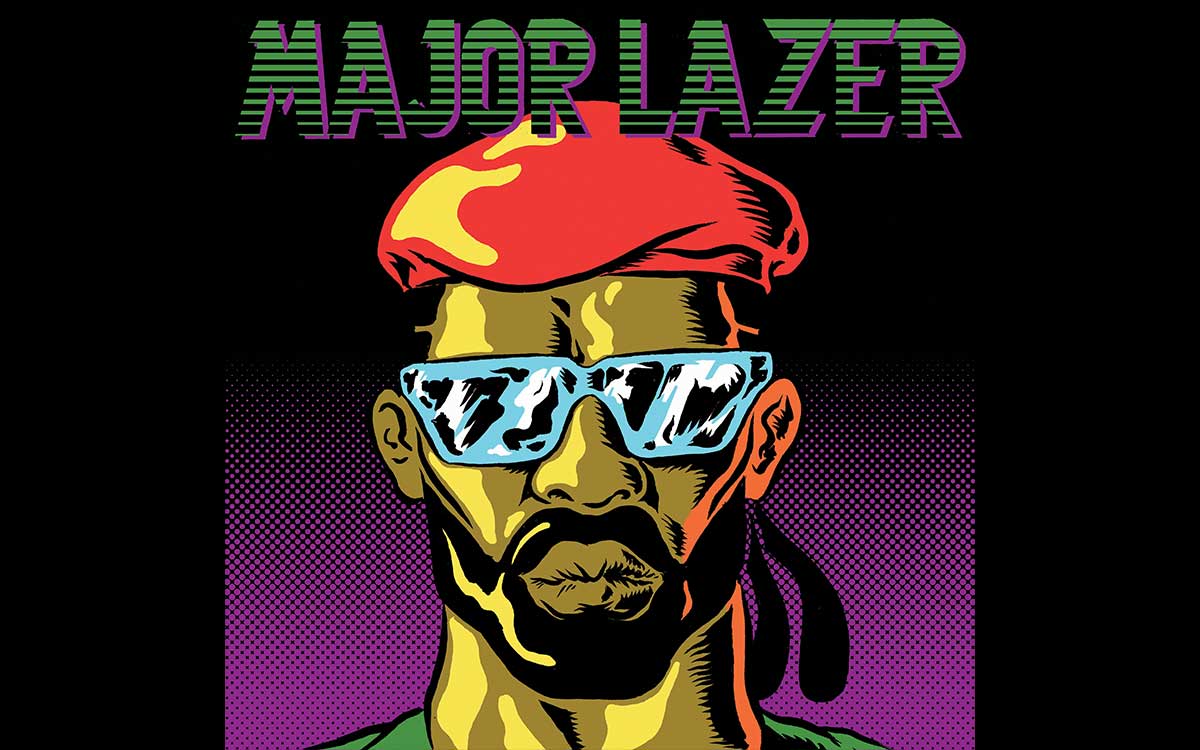 Major Lazer is a Jamaican commando who lost his arm in the secret Zombie War of 1984. The US military rescued him and repurposed experimental lazers as prosthetic limbs. Since then Major Lazer has been a hired renegade soldier for a rogue government operating in secrecy underneath the watch of M5 and the CIA. His cover is that of a dancehall night club owner from Trinidad and he enlisted the help of long-time allies and uber-producers, Diplo and Switch, to produce his first LP. His true mission is to protect the world from the dark forces of evil that live just under the surface of a civilized society. He fights vampires and various monsters, parties hard, and has a rocket powered skateboard.

As part of a plan to subdue the forces of evil with a batch of futuristic dancehall bangers, the three encamped at Tuff Gong Studios in Jamaica to record the Major Lazer record. The product of this collaboration is Guns Don’t Kill People… Lazers Do, a collection of tracks that draws from the rich dancehall tradition of Jamaica, the futuristic dance-floor-killing aesthetic of Diplo and Switch, and contributions from some of the biggest names in dancehall today. The record runs global pop culture through the filter of Major Lazer’s particular brand of 80’s-inspired digital dancehall, at once an homage to a bygone era and a look to the future of dance music.

Diplo (Philadelphia-based DJ and producer Wesley Pentz), incorporates such disparate influences as Miami Bass and Baile Funk into the high-tech ecclecticism of his productions. Known for his forward-thinking productions for MIA, Bonde Do Role and many others, and for the solo LP of cinematic, sample-based hip hop entitled Florida he recorded for the Ninja Tune imprint. Diplo is also the founder and owner of Mad Decent records, which has put out records by DJ Blaqstarr and Bonde do Role.

Switch (the pseudonym of British producer and DJ Dave Taylor) is the owner of one of the most progressive and respected underground dance music labels around, Dubsided. His work as producer is revered by critics, emulated by his fellow DJs, and sweated hard by dance floors on both sides of the Atlantic. Switch also permanently endeared himself to the bespectacled music cogniscenti with his contribution to Santigold’s critically acclaimed self-titled debut.Major Lazer All Music Guide BiographyMajor Lazer is the digital reggae/dancehall project of Diplo (Philadelphia’s Wes Pentz) and Switch (London’s Dave Taylor), two globetrotting, tastemaking DJ/producers whose previous collaborations notably included production work for M.I.A. and Santigold. Recorded at Jamaica’s Tuff Gong studios, their debut album, Guns Don’t Kill People… Lazers Do, featured vocal contributions from noted dancehall stars including Vybz Kartel, Busy Signal, Mr. Vegas, and Turbulence, as well as Santigold, Nina Sky, and rapper Amanda Blank. Much anticipation and online chatter were fueled in part by the novelty video/song “Zumbi,” featuring the comedian Andy Milonakis, the frenetic, legitimate lead single “Hold the Line,” and a goofy, invented back-story about a renegade Jamaican commando with prosthetic laser arms who was allegedly a Zombie War veteran and vampire-fighting C.I.A. operative (but was demonstrably a rampant Twitter user). The album was released in June of 2009 as a joint venture between Downtown Records and Diplo’s Mad Decent label. Lazers Never Die, an EP with two new songs and three remixes, followed in 2010, along with Lazerproof, a collaborative mixtape with the English electro-pop duo La Roux. In 2012, Snoop Dogg joined Diplo for the digital reggae single “La La La,” released under the name Snoop Lion, while Switch announced he was leaving the project. Diplo carried on with producer Jillionaire, joining the group for Free the Universe, the group’s sophomore album. The 2013 release featured Wyclef, Bruno Mars, Vybz Kartel, and Shaggy on its quite long guest list. Sean Paul and Pharrell Williams joined the party for the 2014 EP Apocalypse Soon. ~ K. Ross Hoffman, Rovi